6 min to readSustainabilityThis past summer Vera, from LeasePlan International, and her family set out for their first road trip through Europe in their electric car! Vera has been driving a Hyundai Kona since 2020 and this was her first long trip in an EV. From the Netherlands, through Germany and Austria, with longer stays in Italy then back via Switzerland.
Share this message

The strategy was to split the road trip into 350km sections

I’ve had my EV for two years now but this was the first time we’ve driven this far in our EV and I was a little nervous. The strategy we came up with was to split the trip into sections of roughly 300-500 kilometres per day so worrying about range wouldn’t be a problem. The shorter sections also meant we could see a lot more and our young children were much happier to spend less time in the car!

Starting in our hometown of Lelystad, the Netherlands, we headed for Germany. Our first stop was in Frankfurt for one night before heading on to Chiemsee. Chiemsee is a lake close to the Austrian border and we stayed there for three days. From Chiemsee we drove through Austria and the north of Italy, stopping in Tarvisio for one night. Then on to Cavallino-Treporti for a week of camping and relaxing.

On the way back we took a different route. From the camping ground in Cavallino-Treporti we took a boat for a short trip to Venice before starting the journey back home. Our first stop was in Lake Como where we stayed for three days. From Lake Como we drove back through Germany via Switzerland. This was the only part of the trip where there were big traffic jams. In Germany we stayed one night in Offenburg and two nights in Cologne before arriving home.

Planning the route with charging stops ahead of time was essential

When planning the route, we tried to alternate the stops between places with more nature and city trips so it was a city, lake, city, lake holiday. We used A Better Routeplanner (ABRP) to map out the entire journey. In ABRP you can add multiple destinations, your starting battery charge, and the amount of charge you want to have when you arrive at your destination. Once you’ve entered all this, ABRP will map out all the charging stops you need and let you know how long you will need to charge for at each stop.

In the towns we stopped in it was easier to use Chargemap to find charging locations. Chargemap was really accurate, and there were no problems with broken chargers or waiting too long to charge. Along the highways, we only had to wait twice for a charger, once in Austria and on the way back in Switzerland.

Bluelink from Hyundai was great for charging peace of mind

Bluelink is an app from Hyundai that connects your car with your phone. Through the app I could check on how my car was charging and what percentage it was at while we were out. During the holiday we only had it happen once that our car wasn’t charging properly. We had stopped for a longer lunch and charging session and when I checked the app I saw the car wasn’t charging anymore. There was a fault with the charging pole, but we were easily able to re-start the charging session and continue charging. Without the app we would have come back to an almost empty battery so being able to easily check and see whether the car was charging eased any concerns.

Only two charging passes were needed

From colleagues and friends, I had heard I would need a couple of charging passes for my holiday, but I found Travelcard, the charging pass LeasePlan drivers in the Netherlands use, was accepted almost everywhere! There was only one charging station in Italy (off highway) where Travelcard wasn’t accepted, and we used a Shell Recharge pass there.

The charging ins and outs across 5 countries

With the strategy of driving in shorter sections there was never really a point that we were worried about range or struggling to find a charger. For charging we took a plug for a household socket but didn’t end up needing it as most charging sessions were at fast chargers on highways.

Lake Como was one of the harder areas to find a charger and there were no fast chargers close by. We ended up having to charge at a Lidl supermarket, which wasn’t close to the lake and a bit inconvenient to get to. Combining the charging with some grocery shopping made the trip worth it and while it was a slow charger, it was free to charge! When we left Lake Como, we had a battery level of about 35% and our route planner was telling us to find a charger almost immediately after leaving. Despite the lack of charging infrastructure at Lake Como, I wouldn’t have skipped it as a destination. It’s just good to keep in mind if you’re travelling there with an EV.

There were a few stranger charging stations too. Including a fast charger in Germany that our navigation took us to. It was in the middle of nowhere, next to a garage and with no other amenities around. Luckily it was a fast charger, so we didn’t need to stay for that long. In Italy we found some Ionity charging stations that were very hidden away, behind some shops and not visible unless you know where to go. It’s always good to check on Google maps what amenities are at charging stations, especially if you’re planning to charge for a longer time.

No changes to driving style were needed

With the route planned out and a lot of chargers along the way, we didn’t need to change our driving style to fit the EV. Safety is always a top priority for us when driving, especially with two small children in the car. We always drove the speed limit and in Germany on the autobahn we drove maximum around 130 kilometres per hour.

To optimise range, you can do a few things like turning the air-conditioning off but this summer it was too hot to even consider that! With the planning we did, we were never in a situation where we were trying to extend the range as there was always plenty.

Lessons for next time:

Tips for EV drivers embarking on a road trip: 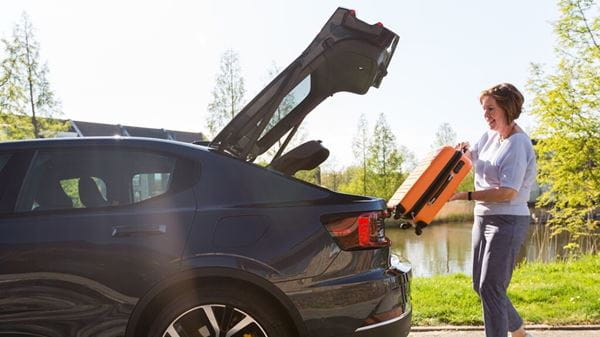