What’s next ? Watt’s next !: 5 myths about electric driving debunked

4 min to readSustainabilityCar manufacturers couldn't agree more: the electric car is the car of the future. LeasePlan, as mobility supplier, has also taken a front-line role and is building the way to an emission-free future together with its clients. The path is clear, especially now that the last stubborn prejudices about electric driving have been swept off the map by LeasePlan.
Share this

1. Electric cars are expensive It is true that electric cars are more expensive to purchase than their petrol or diesel equivalent, for the time being. According to research carried out by The European Consumer Organisation (BEUC), 2020 will be a turning point. By that time, electric cars will have a TCO (Total Cost of Ownership) comparable to that of a car with internal combustion engine. In spite of this, there are a number of attenuating circumstances under which an electric vehicle is already the cheapest solution at the end of the day.

Starting with the tax reform in Luxembourg which aims to favour more respectful vehicles with lower emissions rates, not to mention gasoline, hybrid and electric engines.

It should be remembered that, as part of this reform, the tax reform rate applied for the calculation of the benefit in kind is now 0,5 % of the purchase price. However, it does not end there. During its whole life cycle, an electric vehicle is significantly less expensive than its petrol or diesel counterpart. This is because an electric motor requires much less maintenance than does an internal combustion engine, and the savings in fuel expenses in practice make up for a large part of the cost. It is hard to calculate the actual energy cost of an electric car because it depends on your energy supplier, your charging habits, and of course your driving style too. However, for a compact EV (Nissan LEAF and Volkswagen e-Golf category) which consumes 15 kWh/100 km, you can count on a real cost of 2.5 to 4 euros per 100 kilometres driven. In short: an amount which even the most economical petrol or diesel vehicles can only dream of.

2. The driving range is still too limited Another issue which often comes up as a point of criticism for electric vehicles is the fact that their battery does not last long, after which they need to be plugged in for a very long time. Some context would be appropriate here. The time in which electric cars were out of charge after 150 kilometres is already behind us, thanks to the swiftly evolving battery technology. Whereas Tesla used to be the only manufacturer which could boast a 'decent' autonomy of 400 to 500 kilometres, nowadays mass manufacturers such as Nissan, Renault, and Volkswagen have also achieved the reassuring 300-kilometre mark. The charging process is nowadays also much more efficient than during the pioneer days of the electric car, but we will be getting back to that shortly.

3. The driving experience with electric cars is unsatisfactory

Whoever has had the 'luck' to have been for a drive in a Mitsubishi i-MiEV or a Peugeot iOn can testify: the first 'modern' EVs were a torture for car enthusiasts. It fortunately did not take long for the industry to reverse this trend. Roaring sports car enthusiasts will not be happy to hear it, but electric cars have other intrinsic qualities to win over the enthusiasts. As well as having a lower centre of gravity due to the low-lying batteries (which are often incorporated in the bottom plate), a car with an electric motor is many times more efficient than one with a traditional internal combustion engine. The maximum torque is available from the first revolution, whereby even the humblest electric car can exhibit sports car performance at the traffic lights. Thus, a BMW i3 can easily compete with a Porsche, while a Tesla can make even the fastest Lamborghinis or Ferraris bite the dust...

4. EVs are 'false' polluters Since car manufacturers have turned en masse to electric cars for a solution after the ‘dieselgate’ scandal, an opposite movement has emerged which questions the environmental benefits of electric driving again. How about the environmental cost of producing batteries? How about the exponential increase in demand for lithium and cobalt, raw materials which moreover are often mined in appalling circumstances? Many organizations are still examining the matter in minute detail, but in the meantime the general consensus is that an electric car is less damaging to the environment 'from well to wheel' than a typical diesel vehicle.

A lot nevertheless depends on the manner in which the electricity is generated. Poland makes extensive use of coal and has the 'dirtiest' power generation mix in Europe with about 650 grams of CO2 per kWh. But even there, emissions of CO2 for electric vehicles, considering their whole life cycle, are about 25% less than for diesel vehicles. The cleaner the power generation mix, the bigger the difference. In Sweden, where energy is often renewable, an electric car is 85 (!) times cleaner than a diesel car.

5. Electric cars are anything but practical It is more trouble to charge your electric vehicle than you would like. The investments in charging infrastructure have fortunately already made sure that there is always a charging station close by, but this sort of battery, unlike a fuel tank, will not be full in a matter of minutes. A number of car manufacturers have recently joined forces to create a European network of fast chargers, but even with a fast charger it will take you 20-30 minutes to hit the road again (compare this to charging through a normal power socket which takes almost the whole night). While we wait for inductive charging methods, the breakthrough of the revolutionary 'solid state' batteries, or - perhaps in a more distant future - fuel cell vehicles, good planning is key!

In Luxembourg, there are 157 charging points. To facilitate the charging of electric vehicles and / or rechargeable hybrids, this number will be increased to 800 public charging stations by 2020 (1600 charging points). 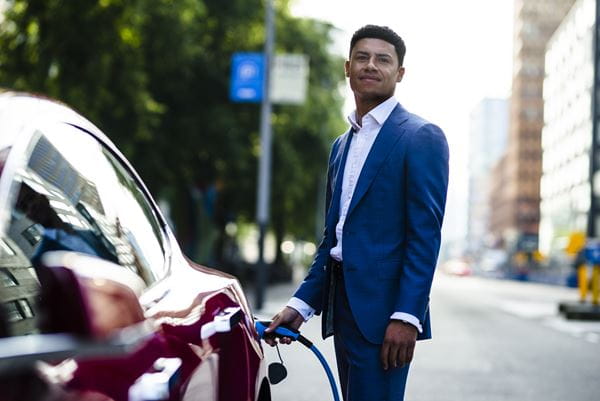